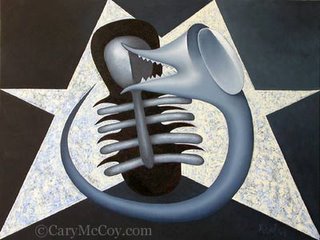 “There is a kind of net that is as old as Methusaleh, as soft as a cobweb and as full as holes, yet it has retained its strength to this day. When a demon wearies of chasing after yesterdays or of going round in circles on a windmill, he can install himself inside a mirror. There he waits like a spider in its web, and the fly is certain to be caught.”
—Isaac Bashevis Singer, The Mirror

The danger of accessing the lower dimensions in order to harness the energy therein is amply illustrated by what transpired with the Nazis. In fact, magikally speaking, the material realm is itself just such a lower dimension, into which consciousness has entered, is in the process of entering, in search of a complete experience of it. The error of both the Nazis and Christianity, and of all external religions, is in their bid to ascend before fully completing entry into—mastery over—the depths from which they aspire to ascend. If one is to attempt to forge gold from lead, one must first gather together a sufficient quantity of lead, otherwise what one has will simply be vaporized by the transformation, the alchemist left with nothing but ashes.
Psychologically speaking, it is only by fully assimilating—becoming one with—the shadow that it can be put behind us where it belongs. One must fully enter into the illusion of self—of organic material existence—before attempting to come out again. To attempt, as the Nazis did, either to turn around or back up while still in the process of entering (i.e., to make a bid for evolution when the devolutionary cycle is not yet complete) is to all intents and purposes impossible. The human mind was not built to pull in two directions at once, and cannot re-negotiate a decision while still in the process of enacting it. It must carry one decision through before contemplating another, even when the second decision entails the cancellation of the first. As they say, “You cannot change horses in mid-stream.” Or reverse flow in mid-current (even when the current is double).
The reason for this is that thought is merely a witness to instinct, and cannot “decide” anything at all. Thought merely observes, and at best negotiates between, the two opposing instincts or impulses. An impulse to go forward can of course be checked and impeded by an impulse to go back, and in rare cases an organism may even reverse its motion. Even in such cases, however, it cannot turn around once inside its reality tunnel, and can only take clumsy and laborious steps backwards. Most organisms are neither resilient nor resourceful enough to withstand the pressure of such a reversal, however, and are compelled to see the process through to the end; only then—if they survive that long—can they begin to contemplate the alternatives. The human race is presently situated in just such a tunnel: unable to back up, it must see its suicidal course through to the end, in order to fully assimilate, and only then correct, the unconscious impulses that drove it down such a course.
In light of such an observation, it is counter-productive to attempt to interpret man’s history through the lens of “conspiracy.” The strain upon the average man’s reason is simply too great. The alternative, however, is to learn to think magikally, and to regard history itself as an elaborate and complex form of conspiracy, designed for one end, that of enslaving our perception. History creates the reasonable illusion of self-determined “reality,” the flattering but false impression that humanity is the master of its destiny. In Joyce’s phrase, history is the nightmare from which humanity struggles to awaken. Only by perceiving it thus does history begin to make any real sense in evolutionary terms, i.e., pertaining to the species as a whole.
Magikal thought views mankind’s entire history and “progress” as the result of subtle and deliberate manipulations from without. The source of these manipulations might be described, provisionally, as “alien intelligence”; for those that prefer more traditional terminology, they are “the gods.”[1] Such an acceptance is necessary in order to proceed to the next—that Earth is and always has been a farm, a tilling ground or “coop” for human souls; that mankind is property, raised like any other livestock for the purpose of consumption. Such a radical idea is needed in order to provoke the reversal that magikal thought requires, from ignorant slaves to conscious masters. In other words, for mankind to ever be free, the first step is to fully recognize the nature of its chains.
*
[1] Though the apparently malign intent of these “gods” belies their superior status. This is one more conundrum of the predatory universe, where fitness is not a moral quality, and nature selects for cunning as much as for kindness. Maybe even more so.
Posted by Jasun at 16:33