Enslaved By Belief: Why Conspiracy Theory Can Never Cut It 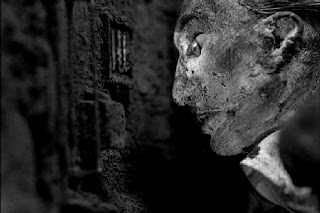 “Mayor mysteries are, strangely enough, never concealed as such, but simply ‘occulted’ or obscured from the eyes of the ignorant or profane by a process which the ancient Egyptians saw in terms of a ladder: we can only view so much from each rung.”
—Murray Hope, Ancient Egypt, the Sirius Connection

It is counter-productive to attempt to interpret man’s history through the lens of “conspiracy”; the strain upon the average man’s reason is simply too great. The alternative, however, is to learn to think magikally and regard history itself as an elaborate and complex form of conspiracy, designed for one end—that of enslaving our perception. History creates the reasonable illusion of self-determined “reality,” the flattering but false impression that humanity is the master of its destiny. But really, in Joyce’s phrase, history is the nightmare from which humanity is struggling to awaken. Only by perceiving it thus does history begin to make any real sense in evolutionary terms, i.e., pertaining to the species as a whole.

Occultism views mankind’s entire history and “progress” as the result of subtle and deliberate manipulations from without. The source of these manipulations might be described, provisionally, as “alien intelligence”; for those who prefer more traditional terminology, they are “the gods.” Such an acceptance is necessary in order to proceed to the next one—that Earth is and always has been a farm, a tilling ground or “coop” for human souls. Mankind is property, raised like any other livestock, for the purpose of consumption. Such a radical idea is needed in order to provoke the reversal that magikal thought requires, from ignorant slaves to conscious masters. In other words, for mankind to be free, the first step is to recognize the precise nature of its chains. 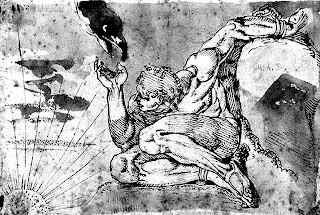 To a greater or lesser extent, all social institutions, organizations, conventions, traditions, cultural movements, and above all religions, have helped keep humanity distracted and diverted from the truth of its predicament. The primary function of these subterfuges—grouped together under the greater movement of “history”—has been to foster the all-important belief that something is being done and that humanity is making progress, evolving, by its own impetus. Such a subterfuge depends above all on suppressing the inescapable fact that, for all of this, humanity continues to march dully and blindly to extinction. That no one ever questions this glaring paradox offers perhaps the strongest proof of all that we are indeed under a collective spell, subject to external “guidance,” and that the fondest hopes and noblest intentions of the race are little more than sops and distractions to keep us from trying to scale the walls of our prison.

Part of the endeavor of this present work has been to demonstrate the various ways in which the formation of paradigms—belief systems—can be manipulated to keep us within our coop, our lunar-terrestrial matrix. At the same time, since Nature always plays fair (even when working through parasitic alien beings), these largely false perceptions are, potentially, showing us the means by which we may escape from the labyrinth—or at least stick our heads over the wall and glimpse beyond the nightmare of history. To see the various warring paradigms as hostile alien races battling for the soul of man would be a childish (or childlike) simplification, and not an especially productive one. Such a view partakes of mechanical and not magikal thinking, and misses the point of “paradigms” entirely. And yet it is not so far distant from the magikal view that regards all this data as evidence of separate, conflicting aspects of an Intergalactic Psyche (the Soul of Man), as it attempts to negotiate a treaty and bring peace to the Earth. In due time, once the fractured psyche of Man is made whole and Christ is back in the saddle, the Universe may finally be healed.

The challenge of viewing our predicament in such metaphorical terms is both unimaginably huge and infinitely subtle, and requires a truly magikal breadth of perception to meet it. In order to understand our predicament—the precise nature and function of our beliefs—humanity must first accept that it is a slave species. It must come to terms with the fact that all our beliefs have been engendered entirely from the outside, by a “Master Race” that perceives us as nothing more than a food source, as fuel for its ascension. This is why magikal thought is essential to the survival of human consciousness at this time. The only way to get free of a situation in which we find ourselves prey to a race of conquering, decaying parasitic vampire gods is to reject all belief, including belief in the existence of such beings! Only magikal thinking—which believes that everything is possible and that nothing is what it seems—can accomplish such a mental back-flip, and escape the Chinese finger trap of Consensus reality. 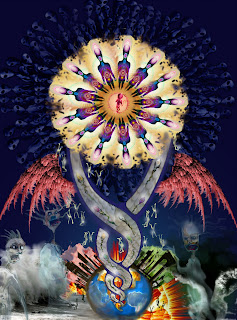 (Above image: "Apotheosis of Species," by Lucinda Horan)
Posted by Jasun at 22:28

hy aeolus, greetings from germany...
great post, great book (bought it from amazon and read it lately).
If you would like to chat with a german fellow (alan watt translator by the way) who likes your work, send a reply to graydeath@mail2world.com

I think most "conspiracy theory" is a mess of projection, hucksterism and delusion. In other words, it's no different from the mainstream news media.

However, I think conspiracy research is valid. Research grounded in the rules of responsible journalism. I think realizing the depth of corruption in this world helps free the mind from the manufactured dichotomies we are confronted with and expected to participate in.

AK!
Masterful article. I can say that You have summed up my 19 year journey (thus far -

it is still ongoing and I love it!) of research and gnosis, growth and spiritual

evolution perfectly. It is a journey which began simply with the awareness that

I progressed from there in baby steps and then stages, some slow and (very) painful

and some radical and revolutionary. Right to the edge of the abyss and across!

is what it seems—can accomplish such a mental back-flip, and escape the Chinese

and beyond agreement I think that line really needs an exclamation point or two !!

wow! that one came out messed - sorry about that cut and paste from the text editor with the word wrap on.

AK wrote...
'History creates the reasonable illusion of self-determined “reality,” the flattering but false impression that humanity is the master of its destiny.'

If humanity can hook up with Divine Consciousness the ‘Master Race’ will learn a thing or two from its slaves.

AK wrote...
'In order to understand our predicament—the precise nature and function of our beliefs—humanity must first accept that it is a slave species. It must come to terms with the fact that all our beliefs have been engendered entirely from the outside, by a “Master Race” that perceives us as nothing more than a food source, as fuel for its ascension.'

While I can accept that the powers and principalities that we battle have designed and therefore perceive us as nothing more than a food source, it may also be that the ‘Master Race’ is a food source for Galactic Consciousness and will be redeemed thereby, both Ahriman and Lucifer.

It seems also that these two sentences do not provide much room for considering the impact that Divine Consciousness may have on beliefs or their development.

Excellent writing, thank you very much

I think this was beautifully written. I'm with you on the removal of all beleif systems, trading sets of rules accomplishs nothing.

The consipracy research is totaly valid, but only for so long. It really helped open the door to freeing my mind, but it takes so much more than that.

All things are possibile

Congrats to you both.

Based on the symbolisms and synchronicities that we keep encountering in our daily life, we are literally forced to forge a new intellectually discourse to examine alternative and conspiracy research.

We have all evolved from that moment of awareness mentioned by StrangeEye. The question is now where do we go with all that we have learned and discerned?

As we embraced the radical and discard the traditional, the daily narrative of conspiracy research became almost formulaic, safe and acceptable. We must now reexamine the mythologies, symbolisms, synchronicities, and archetypes with an understanding that this is more than just a theory, but more like unto a reflection of something unrealized.

The current discourse and interpretation that I am seeing here and on the Secret Sun will go a long way in paving a path to realising that.

how exactly (or metaphorically) do the gods eat us? Do they eat the plants as well? How about the rocks? Are you suggesting they eat our thoughts or emotions?

How does this rather new theory (Fortean?) relate with the Buddha (not Buddhism!) and his perception of the void, nirvana, and the demons in between? Are you simply updating it in a comical (comic book) way? The Hindu's as well preceeding Bhudda seemed hip to your jive. Perhaps each generation states it anew, and inescapably creates new prisons, new gods. Bhudda demanded that NO TEMPLES be built, that the temple be nature, and monks preach only outdoors. But it didn't take long....
(Those old Tibetans had slaves didn't they? Didn't they use reincarnation to justify it? Didn't Hitler just LOVE them?)
Bhudda also did not teach reincarnation. That didn't take long to return either.

If there is a hierarchy of being, a great chain, it seems only natural for an "advanced" "being" to "watch" us. The cut worm forgives the plow. However, if we were created using the life force, ultimate freedom cannot be denied. The void surely awaits, as prisons the humans create, shall perish in our imagination.
PEACE
9robert

I'm a beginner at this, found your blog by coincidence, and only understand half of it, but am amazed:-)It's like a new world...

Podcast #28 was absolutely wonderful. I wrote to someone once that I thought activists were idiots, and I would like clarify that. When I wrote that, I was thinking of the ego-agrandizing kind of activist who has a sort of martyr complex, the kind of activists and activism that are promoted on Corporate Television and that does nothing but give the MS's reason to "crack down" and institute a new round of oppressive laws designed to "promote law and order". I did not mean the kind of activist who is fighting for justice for themselves or for their people.

Those who do not even know that they dont "understand" may become full of meaning in an instant...Understanding is never required for birth...

Maturation is meaningful, trying to mature through understanding is
like trying to grow a rose from the petal downwards...


hearts beat with meaning not understanding..

actual choice, understanding can not even touch upon

chicken and egg...originate from the same place...no sense in trying to hatch your own plot...unless you hunger for more than your own simple meaning....

anything "extra" is delusion...including everything a have written here...