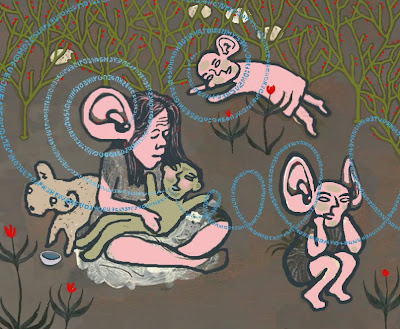 The Listener: Developing a Dialogue with Self

“In Genesis, Yahweh’s first instruction to Adam is not something practical such as how to make a fire or fashion a weapon. He teaches the first man to name all of His creatures. By this act, Yahweh emphasizes that naming is the most potent power He will confer on mortals. Through naming, Adam gains ‘dominion over all the earth.’ Naming confers meaning and order. To name is to know. To know is to control.”

—Leonard Schlain, The Alphabet Vs. the Goddess

It is logical to presume that, before words were ever written down, they began as sounds. While we can only presume this about the species, we can observe it first hand when it comes to individuals. When a baby learns to speak it doesn’t build a vocabulary word by word (a process which begins later), it starts by making unintelligible sounds in imitation of what it hears. Gradually, these sounds begin to resemble recognizable language and verbal communication begins. Soon after this, the child learns to read and write and language becomes fixed, not only as sound but as image. It becomes script, code. Writing then introduces a new possibility, that of words separate from direct communication, and the corresponding possibility of communication occurring, not only across space, but across time. As Leonard Schlain writes in The Alphabet Versus the Goddess, “The written word is essentially immortal. To a hyper-conscious primate who had become aware that death was inevitable, the discovery of a method to project one’s self beyond a single life span seemed nothing less than miraculous.”

There is another possibility which Schlain does not discuss, another purpose for writing which has nothing to do with immortality or even communication in the ordinary sense. That is the possibility of writing without any intention of ever sharing it with another human being—such as for example when writing a journal. Thousand, perhaps millions, of people do this every day (admittedly less so now that blogs and Facebook have opened up the possibility of communicating with strangers), and the assumed wisdom is that keeping a journal is a therapeutic process. If this is really the case, how does it work? The obvious answer is that writing a journal is a way to communicate with oneself.

“To start a dialogue,

Short of talking to oneself (which creates a very different effect), self-communication is only possible via writing. Writing down an account of one’s activities or thoughts creates a distance between oneself and the raw material of one’s existence, and potentially between one’s everyday “motor” self and one’s consciousness. As in good therapy, one is talking to an impartial, disinterested, but wholly attentive other, the difference being that, in this case, the “Listener” is oneself. This Listener is something we can all develop within ourselves, without which no real communication is possible. Before we can begin to listen to others, we have to learn to listen to ourselves. Only then can we find our true voice, because real speech can only come about as a response to listening, whether internally or externally.[1]

We are all familiar with the phrase “to get something off your chest,” the idea being that, by talking about something that is causing us stress or discomfort, we can let it go, or at least see it in a less stressful light. The reason this works is that, by talking about something with a second party, we can see it from a different perspective, from the outside rather than the inside, and reduce its power to affect us. This can work when we have a sympathetic ear to vent our frustration to, but it tends to work better when we have a neutral ear, such as in therapy. Therapy allows us to re-experience our problem from the perspective of an impartial but curious observer who is devoid of any strong emotional reaction. This presence is the Listener, being at once both interested and disinterested, sympathetic but impartial, uninvolved. When we communicate with ourselves in this way, via writing, creative expression, deep thought or meditation, we bring forth The Listener—the part of us that is equivalent to a sympathetic but disinterested friend or a therapist—and can then reconceive the problem from a new perspective. The benefits of this are two-fold: not only do we experience our problem in a less stressful light, we also gain access to a part of ourselves that is able to rise above any problem because it is entirely uninvolved, while at the same time, privy to inside information about us. The Listener is our own inner therapist.

Whether by sharing with a neutral party or writing it down, what is occurring through the act of communicating is that we get to see what’s inside us in a way that feels safe to “take on board.” In terms of the issue being reconceived, if we are angry, we may describe our anger and the reasons for it, thereby seeing the shape of it and coming to “grips” with it. We can then own the anger in such a way that confronting the original cause of our anger becomes much easier and more straightforward. Instead of acting in anger, we “take” our anger to the person or situation and express it in a more balanced, less emotive fashion. Writing a journal, like talking to a therapist, is a way of testing the contents of our minds, both conscious and unconscious (writing will bring unconscious matter to the surface just as much as therapy), making sure that we have got to grips with it before letting others see it. It is a psychological rehearsal space in which we can see exactly what we are capable of and what we’re not—“where we’re at”—before going on stage and performing in front of a live audience.

This sort of dialoguing with the self can have an accumulative effect: it creates a recursive feedback loop in which, the more we reveal the contents of our minds to ourselves and integrate them, the more we accept ourselves as we are, the more we can open up to others, and so on. Alchemically speaking, we are drawing the lead into the laboratory of our minds and transmuting it, via awareness, over a long painful process, into gold. By establishing a different way of relating to ourselves through on-going dialogue, we are establishing a kind of private social identity which, little by little, we can take with us into the world. By strengthening our individual sense of truth, meaning, and value, we are slowly “finding our feet” in reality.

[1] If we are too busy criticizing ourselves we won’t really hear what we are trying to communicate. In the same way, when we pretend to listen to others, we are actually too busy figuring out what we want to say next, and simply waiting for our chance to do so. This is not dialogue.

What a travesty we teach hunger, it's just not on. I wanna results!

Our bodies are perfect machines irrespective of outside influences.

Have you checked your oil and water?

No. No, I'm sticking with travesty. That makes sense.

The BEEF [conflict==tragedy]: Why did you give away your fortune [inheritance?], damn it!

It's WHAT (and how imminent) and whether you want (can be rectified)
not THAT you want (to live comfortably) [is not sin] power steering.

To be hungry and not eat is piety and stupid.

Q: What are you hungry for? {reverse into it}

Walking back through the mall with my mother...
Do you think those kids got a job minding dogs?
In the car on the way home, your Dad says he is
feeling seedy. The fuck does that mean, crafty?

I'm not sure what it is about me that attracts incoherent/free-associative comments so much (in bars the crazy would always talk to me), but in the end too much "right-brain" babble is counterproductive and discourages discussion. So I'm limiting how many of these comments I publish; over-indulge and you're just speaking into a void: not even i am going to read them. Thanks.

What it is about you...it seems I was wrong about. Far away your well lit door.

Brilliant post J,
and nice to see you again...!

I guess all these wacked out comments, including some recent insults, which I'm not bothering to publish because I don't want to put other people off, are letting me know that I have created a kind of cult of personality here? These comments seem to be attempts to connect to me, personally (I don't see any other reason fr them), but unfortunately they don't have anything to do with what I'm doing at present, or with the reason I am even posting at all. They're fannish in the worst sense. (I don't include CCC in this, so much, coz he's in a class of his own. Apologies to CCC if I don't publish your comments either, it's for the same reason, they're not inviting discussion, at least not the kind I want to see.)

Therefore, I'd ask any such personal/non-sense comments be emailed to me privately since that's as far as they're going to get anyway.

Thanks, and thanks TD for being the nice guy as ever.

Dont sweat the jerks...they are legion...

but if I may venture an opinion...this is the pond youre swimming in. In my admittedly limited contact with oto/goldendawn types, I have found them to be cowardly, arrogant tools looking for power in all the wrong places. But I guess thats to be expected with a role model like AC.

that you seem to be the complete opposite of that is your strongest recommendation, in my book. That and the fact that you are somehow able to make coherent points without the use of gematria-infused polyhedral star charts from galaxy 817 that correspond to precise screenshots from last weeks episode of Top Chef. Or maybe thats just my ignorance showing again.

Awesome article. I discovered this form of writing while getting over an ex, losing a job, and moving to a different continent. Writing is a scratch in time not much different from natural phenomena, like earth strata or rings in a tree trunk. And you can scratch to the core of truth, using the right intention to write about true love or guidance. Manifesto, constitution, "law of god". Let it flow, and don't obsess. Obsession is stagnation.