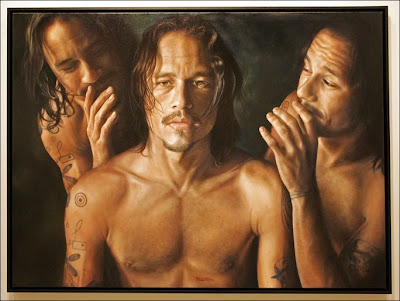 After Heath Ledger’s death, Jack Nicholson made the cryptic remark: “I warned him.”

What exactly did Nicholson warn Ledger about? It seems likely, given the context, that Nicholson was referring to the potentially deranging effects of playing a psychopath with such extreme qualities as the Joker. The Joker is not merely a psychopath but an archetypal psychopath: in the ranks of popular cultural thought-forms or 20th century tulpas, he is practically a god. (Research for the first Batman movie claimed that the bat insignia was the second most recognizable symbol to kids, after the smiley face.)

If I am right in presenting the idea that fictional creations become semi-autonomous, even semi-conscious, entities within the Imaginal realms, via the psychic energy we give to them (an idea Neil Gaiman plays with in Sandman, and Alan Moore with Promethea), then presumably, the more popular a character becomes—the more narratives are spun around it—the “stronger,” the more powerful and autonomous, the tulpa would become? Think of Father Christmas or Jesus Christ. Whatever odd mix of myth, legend, and historical fact lies behind these characters, they are profoundly real in their effects, and not just in our psyches but through our actions. Parents even pretend to be Santa to maintain the illusion.

In The Manson Secret, Peter Levenda touches on the parallels between method acting (the Stanislavsky method) and the creation of “alters” via mind control programming—in other words, between the assumption of roles as a performer, and the fragmentation of the psyche as seen in multiple personality disorder, etc. In the old days, however—and even today in more shamanic cultures—what we term schizophrenia and “MPD” would more likely be understood as a kind of entity-possession. When trauma—either induced via abuse or other forms of “handling” or self-induced via drugs, magikal rituals, or acting techniques—creates an opening or fracture in the psyche, external forces can enter in and assume control of that psyche. One could also say that, by tapping into the unconscious mind, suppressed and disowned aspects of the psyche—both daimonic and demonic—emerge and take over consciousness. The shamanic view sees the forces as external and demonic, the psychological view sees them as internal, pertaining to the psyche. But the basic description is the same, as is the end result: loss of control, madness, despair, or, in rare cases, initiation and illumination, and maybe an Oscar-winning performance!

I already described how actors might be chosen as vessels or conduits—“strange attractors”—by which psychic energy could be drawn off and redirected toward the creation of thought-forms. These thought-forms would not be under the control of the actor, much less the audience (whose psychic energy they are made up of), but rather that of a third, unseen element: a power, let’s say, hidden behind the scenes. Thus these thought-forms would seem to be autonomous, since they are being directed by an outside intelligence independent of their apparent source. Something similar may occur in the cases of MPD and indeed, of actors submersing themselves in a role. It almost indubitably does occur in the case of mind control victims.

When an “alter”—a fragmented aspect of the psyche that has been compartmentalized and become independent—is created, it is effectively cut off from the controlling intelligence of the psyche. Since nature abhors a vacuum, something is inevitably drawn to fill the space, to take hold of the disowned fragment, and to steer and direct it, perhaps even to inhabit it. So in behavioral modification, a subject’s fragment “alter” is programmed and trained as a spy, assassin or sex slave, and this becomes its whole identity and function. Essentially it is then acting upon—as an embodiment of—the will of another, external agency. The same can be said, in religious terms, when demons possess a body and “oust” its soul: a person becomes split into two or more personalities, one of which remains unconscious of the other, and so they begin to act out their “Shadow” in aberrational ways. We say of such a person that they are “possessed,” or are “not themselves,” or simply that they are “out to lunch.” Shamanically speaking, entities (which may themselves be thought-forms created by the person, or by others connected to them, such as “ghosts,” “ancestors,” and suchlike) await such an opportunity to assume control of a person’s psyche and inhabit their body. This can occur in dramatic ways—crimes of passion, mental breakdown, etc—or in subtler but far more prevalent ways, such as compulsive behavior, substance addiction, sexual abuse, and suchlike.

Of all the feeding grounds we might imagine for entities, it’s hard to conceive of a richer, more abundant and varied one than that of Hollywood—where compulsive and extreme behavior is the norm, and where the creation and assumption of alternate personalities and the weaving and pursuing of fake narratives—the deliberate disassociation from reality—is the nature of the business.
Posted by Jasun at 12:07

I hope this isn't too off topic but I wonder your view on psychiatric medications.

Not to mention that Andrew Koenig played the Joker in Sandy Corolla's Batman fan film a few years ago and then sadly committed suicide in Stanley Park. I can't help but wonder now if Koenig was a PKD fan because in the Divine Invasion PKD's god says that Stanley Park is his favorite place in the world. Not to mention this "Dick had been running with heroin addicts in Vancouver; he'd also tried to kill himself." from http://www.latimes.com/entertainment/news/arts/la-ca-philip-k-dick24-2010jan24,0,3831068.story

I find myself slightly obsessed with Ledger & the entire snuff effect of the film. Its disgustingly mesmerizing, very unhealthy. A friend slipped me a hash cookie before going to see TDK...bad idea.... sat riveted to the seat for the entire 21/2 hours, seeing myself completely in the character, imagining myself as him even. I had a friend who said the same thing. I could tell it wasn't acting

One of the creepiest experiences of my life, and it didn't exactly surprise me to learn of bloggers (http://copycateffect.blogspot.com/2008/08/jokers-card-jokawild-and-decapitations.html) following several joker copycat slayings that occured the very summer of the film's release. No doubt Dark Knight is a powerful trigger film.

I wonder how deeply its been imprinted on my brain in fact as I regularly have to fight the pull of slipping it in the player every few weeks for a fresh look-see.
Ugh

This was my introduction to true paranoia & the real possibility of a deeper design. Before it was merely an academic past time, afterwards I really started to feel it.

Hollywood is such a black hole

jenny: like anything case specific, but i'd say at best a short-term solution, at worst, the "cypher option." I think they suppress life-force, and that makes them effective. Is it worth it? Like I say, that depends on the individual case.

Ledger was also pushing a bad boy cool 'atheist' image and had taken photographs portraying himself in 'christ' like poses, the 'trinity' image on the post was a part of it. Strangely though he was the 'godfather' to a close friend. If i were to see the 'public' cool outing of being an 'atheist'. Then Brad Pitt may be next, in this 'sacrificial drama'. Catching the Oscars and midway asleep, I saw Brad refer to Cinema as the universe, Tarantino as the god of it. There could be something building in all this. My view of atheists has been they are usually the most experienced in chemical voyages into the astral realms. Self-medicated mystics, that don't need a 'star creator'.

According to Terry Gilliam, the last line Heath Ledger spoke for filming on the set was "Don't shoot the messenger." When Johnny Depp filmed his role after Ledger's death, Depp asked Gilliam if he could try a new ad-lib: "Don't shoot the messenger", unaware that Ledger had improvised an identical line. Gilliam was astounded, remarking, "Heath is still out there. Johnny's channeling Heath somehow.

I found this blog quite relevant on many levels. Acting and shamanism is a connected trip, with shamanism beginning where acting ends. The reality of entities outside oneself as well, this is not a mystery through the ages and across cultures. The real mystery is why Hollywood doesn't have more stories of strange attractors.