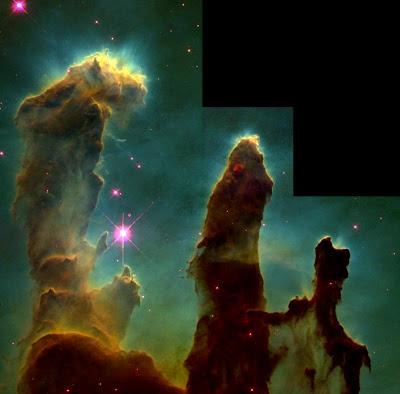 Physics only interests me, like pretty much everything else, in the larger context of psychology. And if psychology is understood as the study of the soul, then its reach potentially encompasses all human experience, including determining what we mean by "soul" or psyche.

Psychology only interests me, like pretty much everything else, in the larger context of physics . And if physics is understood as the study of the body, then its reach potentially encompasses all human experience, including determining what we mean by "body" or physicality.

It’s only by going down into subatomic particles to see how they behave that physics has begun to get to the heart of the matter: as below is *not* as above, because our idea of the laws of physics/nature is out of accord with the reality.

In the application of (Jungian) psychology, it’s only by looking outside of us – not by looking inward – that we can begin to grasp the laws of the psyche, because - surprise, surprise - as without, so within.

Physical reality is not separate from the reality of the psyche, but it has been split off from it, the result being that we now perceive ourselves as living surrounded by dead matter, and as isolate within our own self-reflected, solipsistic, inner reality of “I.”

Yet the patterns of our thoughts and feelings that weave together into identity are physical phenomena, and the patterns of events, stars, planets, and subatomic particles moving outside of us are, in kind, psychological phenomena. They are the movement of a cosmic psyche, of which we are currently but dream-fragments, thought-forms – yet nonetheless made of the same substance as the totality, hence one with it.
Posted by Jasun at 17:53

In the application of (Jungian) psychology, it’s only by looking outside of us – not by looking inward – that we can begin to grasp the laws of the psyche, because - surprise, surprise - as without, so within.

The issue seems to be that hardly anyone knows what they're looking at when they look outside of themselves, at least in underlying symbolic/mythic terms, so they/we don't know what's happening within -- how our thinking, with our consent, is being manipulated by the symbols placed before us. Because of information overload of modern media/military complex , we are drowning in a bombardment of symbols without knowing how or what they (the symbols) are speaking to us.

It's my theory that there is little time or even little need to know the hidden meaning/voice of all those symbol/archetypes. The only archetypes that we need to know to make the correction is Father, Mother, and Child. Once we know how to work those three inner and outer symbols/archetypes (because that's all there really is) then we will learn to navigate the psyche in a way that we each individually as "I" will be the bridge for the three to work as one , through the one, the "I".

A basic understanding of archetypes helps, just like knowing your alphabet helps to write. After a certain point it can become a hindrance.

Seems like knowing the alphabet could only be a hindrance if you don't know the page (where it came from and where it is going and what it says to you in it's blankness/fullness). And most modern westernized people, I presume, don't much consider much about that ole' tabula rasa, at least not in those terms of it's original face and the source of the face. So here we are -- hindered.

The fact is that with the learning of the alphabet and the focussing on reading and writing, we (many of us) have lost the ability to draw. Drawing is what humans do/done forever, starting with the circle -- and you always need at least three (mother, father, child) to make a perfect circle, to make one, to make a face. And we've always had good role models when It comes to knowing and acting like and drawing a full circle -- in all it's phases of apparent existence and non-existence. Drawing from nature, our own, helps to balance the literacy problem that we are face with.

The idea that there is a genuine connection between what is inside and what is outside was only an idea that felt true to me. It became a hard reality that I perceived only after the use of psychedelics.

I think this is the case for a lot of people.

I do understand your cautions about the risks involved w psychedelics and the toll it takes. I don't plan on taking them again. But I feel we should acknowledge the rocks we crawled over to reach the vista we look out upon.

You know when I'm not, like, good with God, I (within) will sometimes fix my eyes on the back of women's heads when they're not looking.

You know at this phase in my relationship(!?!), if these women turned around and they had NO FACE, I wouldn't freak out, and that would be unfortunate (and Frankly impossible) at this stage there's no fear without innocence (either-)or guilt, I would not be worthy, WORTHY, of terror and triumph.

You know it wouldn't even surprise me. No spine tingling chill save the coldness in my head I'd be, like, ah, yeah, hi again, Satan/Lord/God, come back later, when the mind's good and made up, for reason of excessive pride, not hearing for lack of listening.

If another Jesus Christ figure appeared in the sky, He, raise me up? I don't think so!

Puekeo: seems you would enjoy "the alphabet vs the goddess", if you haven't read it yet.