Skywriters in Hades: The Rest 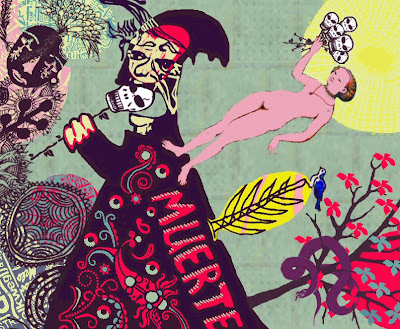 Dying is getting your teeth into something else.

I won't eat fruits (at the wrong time) because the acid eats at my teeth. OMG, soul consumes me, my dis-eased mother damages me to make me perfect.

The brand of the beast is this wondering eye in my forehead, the mark is meant to go about the body (as light), then you'll receive another mark in your forehead... here fishy wishy.

On RS you wrote: "(A celibate also avoids this issue, unless he or she were to practice celibacy within a marriage, which would be a whole other kettle of fish.)"

A celibate avoids the issue of sexual dependency whether within a marriage or not, fine. Why do you say these are two wholly different kettles of fish?

If you're asking that question then evidently you've never been obliged to practice celibacy while in a relationship. Being celibate while solitary is relatively simple and straightforward affair, and comes down to nothing besides hormonal urges being suppressed or, ideally, re-channeled. Celibacy while in a relationship could be a marriage or romantic relationship, or as is perhaps more common, it could be an unrequited love-lust situation; either way it entails not only hormones but the full gamut of emotional-psychological patterns being stirred up. The object of desire is present, but for whatever reason unavailable. That proximity not only increases the physical desire, but triggers all the deeper issues around intimacy, abandonment, and so forth. Like say, a whole other kettle of fish.

Right, what JK said, see our star, Steve Guttenberg "save" himself in High Spirits (1988).

I have practiced celibacy both as a single person and within marriage, and only by choice rather than under obligation. OK, though, I see what you were getting at. Thanks for clarifying. The gamuts of each are definitely different, perhaps two sides of the same coin, two fish in the same kettle. I always found those gamuts to be relatively short-lived, lasting as long as it takes for the channel to establish, and therefore somewhat beside the point. Once the channeling is established the result of the gamuts is largely the same, and the particular contents of the gamuts relatively unimportant.

I found your Skywriter in Hades articles over on Reality Sandwich. As I read, I realized you were the author of the Matrix Warrior book, which my friends have recommended to me but which I hadn't yet had a chance to pick up.

My mind is working a bit fuzzily today so I'm not quite ready to formulate an in-depth response to you-- but for now let's suffice it to say that I am deeply impressed by what I've read and actually stunned at how much it corresponds with / resonates with everything I've been writing, thinking, talking about lately both internally and externally.

I teach a Reading Poetry class at a university-- there I'm exploring with my class the idea that poems and stories (and I haven't brought it up to them-- but yes, philosophy too) are shared dreams, invitations into the mind states of the authors-- and for this reason we want to be selective about what poets we read and what mind states we invite to come into our consciousness.

I've also written a book on the transmutation of consciousness via interaction with the dreamworld... and interestingly, after having written my book I am realizing much more fully how I have only scratched the proverbial surface of this work in my own life.

I'm working quite intently on the project of my own shamanic initiation-- with more or less lucidity on any given day.

Anyway, I could ramble at you for sometime but the point is that I wanted to introduce myself. I'm Carolyn. I haz a blog: www.awesomeyourlife.com. I do sporeganizing for Evolver Pittsburgh. I like the way you think.

glad to meet you, Carolyn!