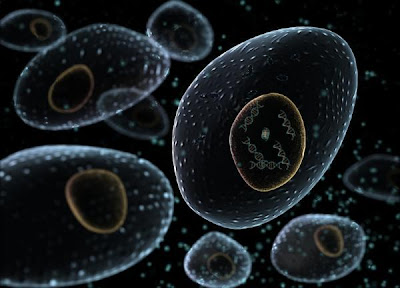 Now the body is a point of reference unto itself - albeit surrounded by infinite time and space, which even as children we know are inevitable realities, or perhaps the edges of a reality too vast to ever be grasped, or contained by the illusory, self-generated "reality" in which we perceive ourselves to be.

Sorry, that came out a bit garbled, but I will press on.

Yet we do not experience ourselves as infinite or eternal, but only as "one" indivisible entity with likes and dislikes, fears and hopes and points to both protect and defend. The sense of a separate, unified existence seems to be sourced in the primary experience of ourselves as a body - specifically, a body surface "inside" a larger physical environment that knows itself through sensation (pleasure, pain, loss and gain) and other sensory/sensual interface with that environment - starting with the womb, then mother, breast (if we are lucky - I wasn't!) and so on. This superficial/sensory experience may be the foundation of the original illusion (sin) of a separate individual ego-self, because of course as bodies we are much more than merely surface: in fact, the really good stuff - the life giving organs, blood and bone of us - is all on the inside, hidden away. We do not have a sensory relationship with, or through, these organs, however, or at least most of us do not. This is perhaps more a symptom than a cause of the creation of the illusory or "ego" self. In other words, our inability to place our awareness on the interior of the body is probably a result, not a cause, of having created a "mind" self that requires only minimum input from the body to maintain its "reality." It may be a bit of both, however. 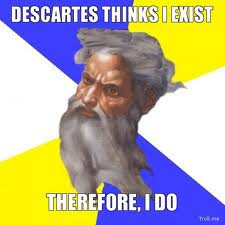 I am aiming to arrive at some "point" with this, but who knows if I will get there. I may die first.

Cells in the body are separated from their environment by a membrane, known as a plasma membrane (see here). That is to say, their interior regions are separated from the greater body by the membrane - which is what makes them individual cells - while at the same time, it could be said that the plasma membrane is also what unites the cells with the body, being as it is the substance that comes between inner and outer, without which cells could not function as co-operative parts of the body. So it is with the physical body of humans and other animals inside of Nature: the very thing that gives us an illusory sense of separate existence is what unites us with a greater existence, being that of the Universe and, so it might be supposed, beyond even the Universe, the Infinite and Eternal.

Moving on. Not only cells but even electrons and protons are now said, in some scientific circles, to have some modicum of self-awareness, and therefore to exist as "discreet" entities. The difference in individual awareness between a Van Gogh and an atom, then, is one of degree, but not of kind. Holy Moses! This can be useful to remember whenever we start getting too big for our britches and thinking that our better "qualities" make us entitled to certain things - to anything at all, in fact.

There is a self-ness to all things in existence. Merely existing designate a "self," whether of star, man, mouse, atom, or snowflake. It's probably for this reason that the idea of an individual self is said in mystical circles to be illusory. If everything is made of snow, there is nothing that is not snow, so what meaning does the word "snow" have anymore? None at all. In religious terminology, this is simply stated as ""everything is equally God" - the Supreme Self of existence being equally present in all of the parts as it is the whole. For the human being, this is known psychologically as the Id (in Freudian terms) or the Self (in Jungian ones), as the Daemon, the Double, the Higher Self or Holy Guardian Angel, and so on. In my own, all-too-paltry, experience, this Id-Entity is unknown - and for the most part unknowable - to the false self. Yet like the Sun and stars, it is an Ego and exists as a localized point of view, or organ of perception, for which a relative sense of separate existence is essential to its function as a component in the greater body of consciousness that is the Universe, and possibly also the Infinite.

Or something. Yeah, I veered into highfalutin mystic mumbo jumbo at the end a bit. It's hard to resist joining the dots even when they go off the page. Let my example serve as warning to ye.

Our function as incarnate id-entities in continuous crysis is not to speculate, but to receive the signal which comes to and through the body from the Universe, and to transmit that signal back to the body in a new, individualized form. I am no biologist, but my guess is that this is equivalent to the function of cells in the human (animal) body, which receive information from the various organs, via the blood perhaps, and then pass on that information in new ways to other cells, and so forth. Another parallel might be the bees, which receive pollen from one flower and then "transmit" it (pass it on) to other flowers while going about their merry, individual (but hive-directed) business.

To the Universe, all business is pleasure, and vice versa.
Posted by Jasun at 08:04

This is a practice encouraged by the yogi "Who Am I?" Great question and practice.

I think "Exquisite Corpse" is a name for the Universe.

"commentary:if one starts reflecting on the course of worldly life, which is a great mysterious enigma, one is faced with questions like, whence did one come, where was onepreviously, who is one's wife, one's son and other relations and what is the existence of oneself and the relation or the bond between one and another, etc. starting with these simple questions, one will be puzzled by many more such questions and the reasons for one's anxiety and attachment. as one keeps on contemplating and meditating on such questions, the delusion will vanish and one will be at peace. one will understand that the body is perishable and the soul is imperishable and one should not become victim of erroneous attachments and the transient nature of these relations. these bonds may teach us or influence us to be tolerant, understand the limits of one's freedom," - http://www.scribd.com/doc/6734188/Bhaja-Govindam-Lyrics-and-Meaning -

It's a great song: short version - plain English translation - http://tinyurl.com/87al7t8 - "23 Who are you? Who am I? From where did I come?
Who is my mother? Who is my father?
Thus enquire, leaving aside the entire world-of-experience,
essenceless and a mere dreamland, born of imagination."

It makes me cry/weep to read it.

I came here because I couldn't find your email. sorry for the involved comments.

"Our function as incarnate id-entities in continuous crysis is not to speculate, but to receive the signal which comes to and through the body from the Universe"

I see it as expressing ourselves intuitively. The mind/ego/thought are tools that the Being/intuition/infinite consciousness/Universe use in order to express itself in this physical manifestation. But we've built a society in which the tools have gained a kind of life of their own, and have supressed the Being. So infinite consciousness is no longer being expressed, and humanity is now a kind of galactictumor or something.

"the tools have gained a kind of life of their own, and have supressed the Being."
But then, perhaps the autonomous element IS the Being... what what?

Information translation
As a means to
Catharsis

Kitschy and so novel...