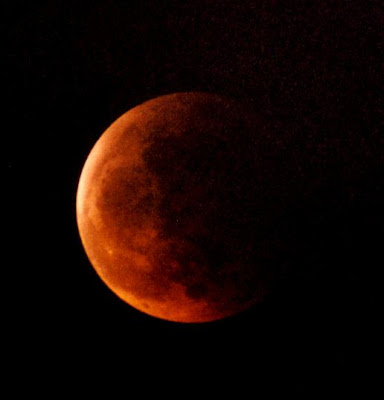 The thing about the Mother is if she doesn't surrender and sacrifice herself for the well-being of her children at the time, then she becomes a negative mother, a Gorgon. She drinks alcohol while I am in the womb, she doesn't breastfeed me, and she is not a present mother. She is half the time drunk, the other half insane. She is not what you'd call a good mother. I don't regret or resent the kind of mother that she was, but I don't have any illusions about it either. She doesn't either. She's not able to let go of being a mother because she feels that she screwed up, so her regret is causing her to hold on to that... but now it's too late to make amends, and it's not really necessary either.

What the Mother needs to do now is be exactly what we need her to be, which is not a mother but a warrior... To meet her death standing tall and looking forward without flinching and without clinging... To show her children how it's done... to surrender to the power of Pluto and be transformed.

Whether she's going to do this or not depends, to some extent, on how much we can let go of that part that is bonded to her. That part will dissolve into nothingness in time for a greater dissolution to come.
Posted by Jasun at 23:45

Mother, you had me but I never had you. I needed you, you didn't need me. so I just gotta tell you... goodbye, goodbye...

Don't fake it baby, lay the real thing on me
The church of man, love
Is such a holy place to be
Make me baby, make me know you really care

Make me jump into the air

There is a theme here.
Mothers who are cold and distant, yet not necessarily bad, often produce sensitive ("un-masculine", almost androgynous) male sons. These offspring, firstly feeling ill-fated, can accept what has happened and what is, leverage their unique wounds and transmute them into spiritual awareness.

At first what seems unfortunate, is really a gift. Personal evolution and individuation can be painful, tension and suffering can be catalysts. The Mother was doing "the Work".

Wounded family lines are somewhat interesting. If you were a hyper-dimensional entity looking to manifest interestingly on Earth, (bear with me), would you chose an ordinary, boring, stable family where nothing happens - or one that forces you (the ego) to rapidly differentiate, self-analyse, transform and reestablish contact with the Self?

Sincere thanks for sharing Aeolus.

Billy, they don't like you to be so free

i would love to do a podcast with you
dan .

"Welcome to the Consciousness machine" NeoGnostic.SuperSaturatedSolutions.

Thunderbolts of Ecstasy,perfumed with droplets of eternity.........
Life undeniably rolls on with the unquenchable lust for Death and Serenity...
an all is perceived in the eye of the perceiver.
in the brilliant void,where all is one none and all, the dance of Love unfolds/is created by those wise souls...lol

Monster Tonkster , get ready for se apocalypse ,it vill be black!

Chick with a Dick.. chill Babe , everything,s gonna work out just fine!,,,,well after everyone gets their just dues!,i guess........

I've just realized that i am not responsible for other peoples experiential loops/trips.and on that note i'm gonna say goodbye.
Thankyou Jason/Aeolus for all your inspirations,revelations,and im/personal transformations.Blessed be Angel! ,
love DivaDancer.

there comes a time when we all need to truely get that our Mothers only "birthed" us and it's the journey we chose for our own awakening and if even a small place in our heart was opened by the initial bonding or touch then our purpose in life is to continue to open...even in our suffering...for the greatest Love is to let go ...wasn't it a dream anyway?

in the name of surrender ...
in the year i was born...
http://www.youtube.com/watch?v=0FlUAxqQkmc&NR=1

continuing on in this mother thmeme...
http://www.youtube.com/watch?v=QHFK1yKfiGo

to be honest, i find the internet a little nebulous and obscuring often of the human spirit behind the lines,so to speak...the typed word is hardly the multi\\dimentional spirit that you feel within/without or the dancing eternity of ever fulfilling dreams before thee!....lol

a little light snack before the evening deluge.a bientot!
http://www.youtube.com/watch?v=qIsohfkOn4c&feature=related

Dear Anonymous if you find the Internet nebulous and obscuring of your human spirit then share who you are and allow your spirit to be known and shared.....Isn't this what we all want CONNECTIOON?

CONNECTIOON?...love it...what i meant was , that it is very hard to spontaneously and holistically interact in a way that's more than just a bunch of passing ideas or a very limited notion of who you're relating to....sound and vision are a lot better!...anyway,take care,and have fun!...D.
ps the tv provided some defined channels as collective realities and now with the internet you can create your own! ...except i'm not sure if people are really any the freer .?or have any better friends...?....etc...

Actually I'm not sure either...my closest friends are ones I can touch and talk to however there have been a few CONNECTIONS through the Internet that have managed to reach into my heart and open spaces....that feels good. but generally involves some "getting" to know .... have a good one. do you have your own blog?