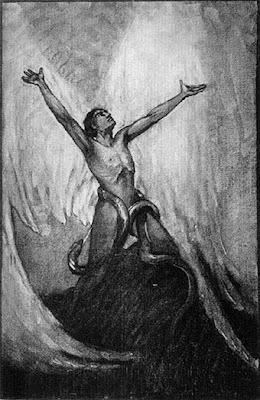 
“Ye are of your father the devil, and the lusts of your father ye will do. He was a murderer from the beginning, and abode not in the truth, because there is no truth in him. When he speaketh a lie, he speaketh of his own: for he is a liar, and the father of it. And because I tell you the truth, ye believe me not.”
—John 8:44,45

And so it was that, instead of freeing humanity, Jeshua sowed the seeds of a new system of worship. Depending upon how much insight we attribute to Jeshua—and whether we consider his mission to have pertained only to the human race or to the evolution of the Cosmos—such a delay can be seen as part of the original plan. But even so, Jeshua no doubt hoped his disciples would have the energy to join him in accepting the plasmate, and that together they would lead humanity to freedom, which would explain his promise, “This generation shall not die before these things come to pass.” For some, perhaps these words were fulfilled. But as an illuminated soul or homoplasmate, Jeshua must have known how slim were the chances that his disciples would be able to follow him, and that in all probability the new strand (Christ’s “vine”) would remain embryonic. This is why Jeshua left precise instructions with the Apostles, specifically Peter, to “feed the sheep,” i.e., spread the word to Gentiles and Jews alike, that the vine might grow and prosper over the next two thousand years and keep the fruit (plasmate) alive. Meanwhile, having fused with Jehovah (and in order not to abandon his “flock”), Christ “descended to Hades.” The magikal implications of this are obscure. The suggestion is that, in the process of doing battle (or making peace) with “the prince of this world” (Yaldaboath or Jehovah), Jeshua merged his consciousness with that of the Earth. “Now is the judgment of this world: now shall the prince of this world be cast out. And I, if I be lifted up from the earth, will draw all men unto me” (John 12:31,32). Jeshua may have been overly optimistic, however, because two thousand years later, humanity is still awaiting the judgment, and has yet to be drawn “unto Christ.”

Like Osiris, Christ went west. “For as Jonas was three days and three nights in the whale’s belly; so shall the Son of man be three days and three nights in the heart of the earth” (Matthew 12:40). Although orthodox Christianity interprets this literally as the three days between crucifixion and resurrection (despite the apparent impossibility of fitting a 72-hour period between Good Friday and Easter Sunday), the magikal perspective might interpret “three days” as three cosmic decans (a decan being ten degrees or one third of an astrological sign), each one lasting 720 years and adding up to the length of an astrological age. In other words, the time it would take for the Earth-Sun alignment to move from Pisces to Aquarius. Christ as Logos is the Creator of the World (“He was in the world and the world was made by him and the world knew him not.” John 1:10). A level above the demiurge, he is answerable only to “the Father” (the source). In his compassion, Christ gave humanity one more age to get its act together, to construct its collective energy body and prepare to “ascend” to unitive consciousness.

During this cycle, the old devil Yaldaboath appears to have been undergoing a process of reform amounting to re-alignment with his true, cosmic function. The inevitable side-effect of this “corrective process,” however (i.e., of living inside the energy field of this aberrant being and being slowly converted to its dark vibration), has been the total, final corruption of the human race, in what might best be termed contagion. The more “repentant” and purified Yaldaboath gets, then, the more contaminated and diseased the Earth, and by extension humanity, has grown. Man has become a devil, and “the Devil,” in turn, humanity’s only chance for salvation! When Christ went down to Hades, it was the last phase of this “transference of power.” Christ became the spirit of Earth, and Man, as such, became the adversary.
Posted by Jasun at 10:07

Westwards from black Saturday, cast into the four elemental hearth, fool [being the fifth]!

With this ring, I thee Wed.

The Pagan knows not The Avatar nor The Senora.