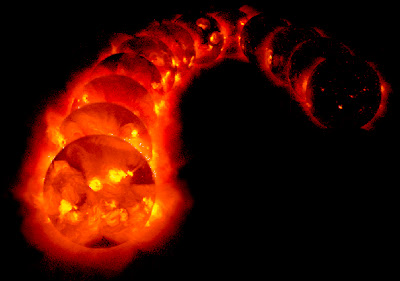 The Point Where Perception is Assembled?

Every God is a Star. Every Devil the Space that is Occupied by that Star.

Yin and Yang: Innermost and Outermost.

A POV that is Constantly Moving Cannot Ever Become a Fixed Identity.

As Moving POVs, Ego that is Sacred is Defined by What It Perceives, not by the Act of Perception.

Ego does not Perceive, but Consciousness Perceives Via the Ego.

It is the linking between Innermost and Outermost.

There is Nothing Behind These Eyes.

But What Gazes Back at the Emptiness, that is Truly Something!

Perceives Only One Thing, Eternally:

Come Join the Linking Process, Where the Shipwrecked Lead the Drowned.
Posted by Jasun at 16:07