From Chapter Six of Homo Serpiens: "The Nazi Stain." 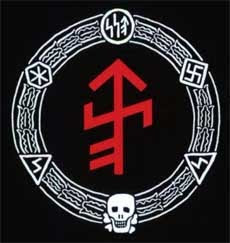 “For he who is ignorant until the end is a creature of oblivion, and he will vanish along with it.”
—The Gospel of Truth, Nag Hammadi Library

We have said that a god-form cannot be destroyed; but is it possible that humanity, or evolution, would go out of its way to assemble an anti-paradigm, a dark host or body of error by which to isolate its shadow and be done with it forever? There seems to be some basis to this idea, poetically illustrated by the Biblical account of the devil being loosed for a little season and permitted to snatch up aberrant souls in a last, mad bout of weeding, before dragging them down (along with himself) into the pit of non-existence forever. Such a simplistic note of triumph is forgivable for the sake of good storytelling; but it is also an overly dualistic way of perceiving a process that may be closer to an alchemist’s turning lead into gold or a gardener drawing flowers from manure than a simple case of good destroying evil. Evil is not destroyed but assimilated, and thereby redeemed. The Nazi stain, along with the Judaic paradigm, must be absorbed into the Aiwaz working, which can then be com-bined with the Christ archetype to create a new god-form, the shape and nature of which is yet largely unknowable.

With the Egyptians we saw how systems of worship can co-exist in harmony, as gods in a pantheon, suggesting that not only is it possible for archetypes to join hands and forge alliances but that it is their very nature to do so. Gods seek company, just as cells bind together to form a body, people gather into tribes, tribes into races, and so on, ad infinitum. But for this binding to take place, all foreign or incompatible elements must be eradicated, all the rough spots ironed out. The fit must be exact, and no “merging,” as such, can occur until the binding is complete.

To clarify: binding is not merging. Two bloods, possessed of distinct and particular substance, may bind but not merge. The difference between binding and merging is that two things that merge become one thing, losing their individual natures in the process. Two things that bind, on the other hand, retain their individual nature and together give rise to a third thing. This also is a key.

The secret end of evil is its own eradication. Self-willed decay is a suicidal urge that serves to annihilate itself.
Posted by Jasun at 16:01

Looking forward to reading the full book in all of it's meta-conceptual, free-associatory AK goodness!