A Herd of Cats: The Stand Alone Complex 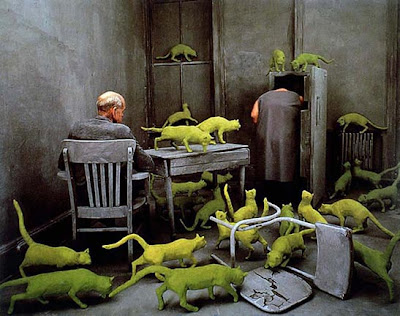 The term “stand alone complex” comes from the Japanese anime film Ghost in the Shell. Wikipedia describes it thus:

A Stand Alone Complex can be compared to the emergent copycat behavior that often occurs after incidents such as serial murders or terrorist attacks. An incident catches the public’s attention and certain types of people ‘get on the bandwagon,’ so to speak. . . . . What separates the Stand Alone Complex from normal copycat behavior is that the originator of the copied action is not even a real person, but merely a rumored figure that performed the copied action. Even without instruction or leadership a certain type of person will spring into action to imitate the rumored action and move toward the same goal even if only subconsciously. The result is an epidemic of copied behavior-with no originator. One could say that the Stand Alone Complex is mass hysteria-with purpose.

What the stand-alone complex describes is individuals who are not part of an overt organization, acting independently yet in ways that are complementary and form part of a common directive or motion: “a herd of cats.” (The recent war against Scientology by “Anonymous” was the first recognized case of a SAC occurring in the real world.) Such individuals appear to be united by a subtler, hidden affinity; rather than group affiliation, they are being moved by a kind of internal resonance that is observable only from a distance: by tracing the effects of individual actions, it becomes possible to discover an underlying order behind them. In the world of sorcerers described by Carlos Castaneda, for example, individual sorcerers are possessed of specific characteristics that pertain to their energetic configuration, and which designate their function within the group (there are four types of male sorcerers, for example, and four types of female).

This suggests that an individual's nature (as with the various animal species) determines its character, disposition, and function within the collective as a whole. Within Nature, for example, although the many species of plant and animal life act separately (concerned primarily with their own survival), their motions intersect and overlap to form a larger system, one in which all isolate activity can be seen as part of a whole. The same must inevitably apply to human beings, even as heavily socialized as we are. Each of us has a given nature and function within the collective, and once aligned with that nature, we would expect to naturally become part of (components within) that greater organism.

Myths describe this process. They map the way in which individual, seemingly independent parts—“characters”—interact (even when at odds) to create an overriding narrative or design with a specific, preordained conclusion or intent. If certain ideas or aspects of a given mythic narrative are emphasized, to the exclusion or distortion of others, disharmony is the inevitable result, and so the primary objective cannot be achieved. Take out the villain from any good myth story and see what becomes of the Hero. Eradicate mosquitoes from the environment, you lose the swallows and bats, until eventually, the whole system collapses.

“Degrading” any one aspect of the whole is an inevitable side-effect of over-emphasizing or “aggrandizing” another, and the result is that the whole system comes off-course. Socialized humans are conditioned, “swayed,” by such biases to go against their nature and act in ways aberrational to their inherent function. As a result, there is an increasing loss of harmony with the other “parts” of the system, among the human species and, by extension, the ecosystem. Myths that glorify the heroic role, for example, diminish the significance and integrity of the other roles and cease to act as psychological blueprints, or at least, as blueprints that show the way towards individuation. In fact, they become different sorts of blueprints, a different class of myth, closer to the popular meaning of the term as what is “believed but untrue,” as opposed to the true meaning of myth, being that which is true, but rarely believed (being disguised as legend or fairy tale).

In our present culture, everyone wants to be the solar hero-leader type, the shining star, and not only of their own lives but, if possible, of other people’s too. Needless to say, this is not possible: a mythic narrative in which every character is in the Hero is one in which the heroic quest has become meaningless. It would be like a body in which all the parts try to act as the head, and in which all refuse to be in a “lower” position. If there is no co-operation, no agreement as to specific function, there can be no functionality. This is not merely death to the system, it is still-birth.
Posted by Jasun at 14:28

relly interesting post , their alot of people really getting into the nilitary weapon conspiracy theory thing . lots to think about and the eastern cult thing resonates on a personal level lwith me too

A myth is a story. Real life can be different sometimes.

You are almost sounding like a sci fi/ocult/underground Thomas Merton, at least to me.

All your base are belong to us.

All your base are belong to us

Very well written. I find it interesting how you also hinted at the "Puppet master" theorem. Or atleast that what it seemed to me. ultimate control and copycat being absolute opposites provide a good basis in which to delve into the topic of the Stand Alone Complex idea.