A Land Before Ego 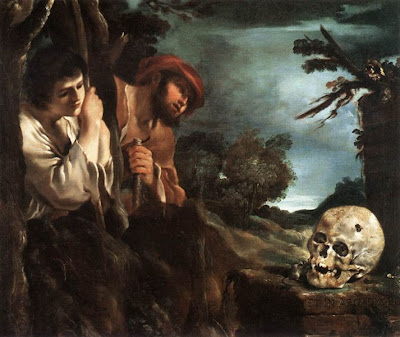 Initially, myths were communicated by word of mouth. Perhaps the tradition of storytelling began when members of the tribe, returning from adventures inner or outer, having experienced new realms literal or figurative, wished to communicate their experiences to others. They would tell their stories by embodying them, allowing the rest of the tribe to share in them vicariously. Since the storyteller and the tale were one and the same, listeners would have had the option of matching the truth embodied by the storyteller within themselves, and of being altered by it through a direct transference of knowledge/experience. There would be no need for interpretation, because the story, being told from a place of Knowing, could be received likewise.

If we imagine a time in which humanity shared in a collective consciousness, a time before the formation of individual ego consciousness, such a hive-mind would have no need of language to communicate. As the gradual formation of separate ego existence began—or rather, as some of this subtler interconnectivity was lost—the possibility, or necessity, of communication between separate individuals (components of the “hive”) would have arisen. Perhaps musical expression was the earliest manifestation of this inter-communication, with song being the first expression of the human voice? Music and song may have been a means of communion within the tribe, to share the bliss (and pain) of a collective organism experiencing the dawning of separative consciousness? At some point, then (perhaps through collective trauma, resulting in a fragmentation of the group psyche), the sense of an individual self came into being. With it came self-reflection, the ability to experience oneself as a separate being. This would have both resulted from and further augmented the possibility of comparing oneself—one’s capacities as a hunter, singer, storyteller, or whatever—with others in the group. Self-awareness led inexorably to self-consciousness; and when comparison became possible, conflict and competition inevitably followed.

Storytelling as we know it today would have been one side effect of this process. When individuals were part of a group consciousness, anything experienced by one of them would have been directly available to the rest. Once this mind-link began to deteriorate, however, the need for language (initially song) as a means for sharing experiences increased. Early storytelling would have often taken place in the evening, around a fire. Such a radiant light source (whether flickering flames or TV set) is an effective means to put the rational side of the brain to sleep, thereby opening up the irrational, unconscious side to direct transmission. These fireside tribal storytelling sessions would have enabled the group to stay attuned at a collective level, even as they were becoming more and more isolate in their daily activities, as warriors, hunter-gatherers, and the like. It was at this point that something began to shift. As already stated, with self-awareness arose the possibility of differentiation. If certain individuals in the group became aware of a greater capacity for individual consciousness (or perhaps a greater facility to move between the two states of consciousness), they would have also understood that knowledge and experience was a source of power, to the individual as much as the group. This realization, and this increased power, had the potential for separating them from, and placing them over, the group.

These individuals would naturally recognize one another; they would tend to form smaller, tighter groups among themselves, in secret. Instead of sharing their knowledge with the rest of the tribe, they could use it to increase their superiority and control over it. If such was their intent, it follows that they would begin to shape and direct the old tribal stories (and any new ones they were instrumental in telling) towards a different end than that of collective individuation. The myths would then be encoded in new ways, meant to reveal their alchemical truths only to those already attuned to the “higher” frequency of the “elite,” while the rest of the tribe would receive a diluted and distorted version: a simple story designed not to empower them but to enchant and entertain them. In other words, to cast a spell over them. Once divested of their deeper alchemical essence, the stories would eventually come to be seen as literal descriptions of heroic feats or hidden treasures, and suchlike; rather than allowing for inner transformation, such stories would inspire fascination with outer goals and accomplishments. They would foster a desire for specialness, which would then give rise to discontent and competitive drive, leading to conflict among the tribe. The members of the tribe would never suspect that the actual source of this conflict lay, not in any social arrangements, or even in themselves (though that would soon be the case), but in the stories themselves.

Behind these stories, inside the mythic narratives or memes which they implanted in the collective psyche, lay the manipulations of a small group of “initiates” (in the early days at least, these initiates would still ostensibly have been a part of the greater tribe, but hidden within it). In the dark as to the actual source of their discontent, the tribe would then turn their hostilities upon one another or upon neighboring tribes, and conflict would inevitably ensue. The mythic narratives once designed for alchemical transformation would then be enacted at a social level, as actual, tooth-and-claw warfare. The resulting fragmentation and chaos would further empower the hidden shaman elite to extend their system of social control, until such a time as it could become open control, complete with law enforcement, religious counsel, military defense, and suchlike.
Posted by Jasun at 11:58

That makes perfect sense to me.

interesting but challenges my existing model of thinking.I had kind of thought that our self relective human conciousness developed as humans brains developed and our ability to manipulate symbols abstractly via language developed. Hence i thought that mythical archetypal symbols would have been at the root of the development our language and the hive mind conciousness is something we are developing towards rather than away from

thanks for the email and your latest podcast. I recommend reading "The Harmless People" by Elizabeth Marshall Thomas. It was the first book on the Bushmen San people -- the original shamans, and the original human culture from 100,000 BCE to 10,000 BCE. It was the defining human culture -- 90% of the males were trained as shamanic healers and there was no warfare -- it was a peaceful culture.

"Perhaps the tradition of storytelling began when members of the tribe, returning from adventures inner or outer, having experienced new realms literal or figurative, wished to communicate their experiences to others."

It might also be possible that story-telling goes hand-in-hand with the use of language, and the adventures acted less as inspiration and more as *content* for the the sotrytelling impulse.

Not saying that this or isn't so, (and if is so, then it's probably not as cut-and-dried as I mentioned above), but it's something to think about.

Most of my train of thought in this regard comes from reading _Anatomy of Criticism_, which was spawned by Northrop Frye's treatment of the works of William Blake, _Fearful Symmetry_.

I know it seems kinds of off-topic, but what I mentioned above comes from _Anatomy_, and leads into other topics that have special interest to the magickian.

(Also, his short book _The Educated Imagination_ describes three different ways of using language that any good magickian can relate to, plus the book can be read in a single afternoon.)

I know this probably seems kind of random and off-topic but it's the chain of thought that part of your post inspired in me, and the works cited to have some interesting significance to the magickian who cares to spend them time on them.