The Curious Tale of Jacob and Esau 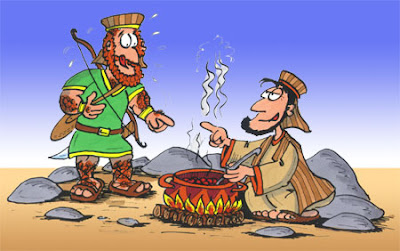 Good old Abraham, everyone's favorite patriarch, had a son named Isaac. Isaac had a wife named Rebekah, and Rebekah gave birth to twins named Jacob and Esau. They may have been twins, but they looked nothing alike, Esau had red skin, and was hairy (yuk!), while Jacob looked more like all those sexy guys you see on tv. Esau grew up to be a outdoorsman, hunter, a real manly man, and favored by his father. Jacob became more of an intellectual, not going out much, and always hanging around with his mommy in the kitchen, as he was the apple of his mommy's eye. Esau wanted to be his own man, independent and upright, so much so that he thoughtlessly gave his birthright away to Jacob for a measly bowl of soup. Rebekah and Jacob later schemed to usurp Esau's blessing from Isaac, which was very important, because of God's favor for the blessed.

Isaac told Esau "Your dwelling will be away from the earths' richness, away from the dew of heaven above. You will live by the sword and you will serve your brother, but when you grow restless you will throw his yoke from off your neck."

A split in the psyche and the rise of mother bonded pen-is mightier than the sword imperialism.
Posted by Jasun at 14:13

The sword is still important, but it usually follows the thrusts of a pen.