Dear sweet brothers of mine 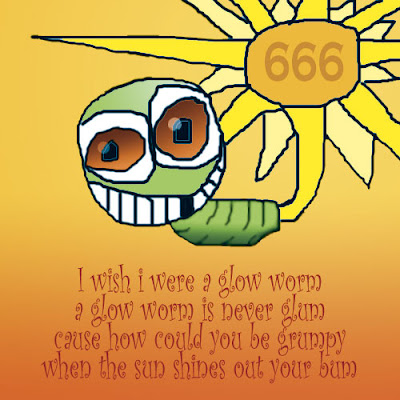 life has a meaning once more

I am the glow worm, and he is me
We share the eyes and the teeth
Of a 2 dollar crack whore
Hanging around the liquor store

Haiku:
This has no meaning
We are here to decompose
Spiritually

Very few people let intense skepticism run off the leash. For reasons of sanity, most of us don’t attack our own most basic beliefs. We all make leaps of faith that are one or two good questions away from being exposed. Here are some examples:

Ask philosophers how they are so certain that the unexamined life is not worth living.

Ask people drinking $200 bottles of wine how they know that it’s OK to drink that money rather than to donate it to save the lives of dozens of starving children.

Ask a patriotic people how America can be “the world’s greatest democracy” when U.S. voter turnout rates are pathetic and when corporate money makes a mockery of almost everything taught in grade school civics classes.

Ask proponents of education how they are so certain that more knowledge won’t actually harm humanity.

Ask non-Believers how anything can matter, since we’ll all be dead in 100 years.

Ask Darwinian biologists whether people aren’t essentially complicated machines for which “free will” is an illusion.

During the 7th game of the World Series, ask ardent sports fans whether it is “just a game.”

This list could go on and on and on. We are incapable of living peaceful lives without protecting many deep assumptions we harbor. Although we might have some pat answers available to those who question our assumptions, our assumptions are, well . . . assumptions. In many ways, then, we ultimately hold ourselves up by our own bootstraps.

Can human beings live happy, contented lives only if they are sustained by religious beliefs? Is reality so depressing that the human intellect can't function unless it hides itself in mythical structures of paranormal gods, magical controls over nature, or imagined beliefs about human nature? Do myths play an important, perhaps a critical role in achieving a happy, contented personal life?

Whether the process of myth free living makes one a happier, mentally healthier individual can only be determined by each individual. Most people are so terrified by the reality of existence, they refuse to even consider the possibility that they can live without their myths. Every secular institution from public schools to government bureaucracies do all they can to keep the terror alive because the secular institutions of social control can only survive if people believe the secular myths just like the churches can only survive if people belief the paranormal myths.

I've personally met so few individuals who were consciously trying to live without myths that I can count them on the fingers of one hand. While those few all appear to be dealing better with life than the myth addicts, that's not enough people to prove the case.

For me there is no choice. I jumped into the brink and found that the rational, scientific, hard headed, no nonsense, myth free living serves me, my wife, and my children much better than all the myths we left behind.

I never could understand people who mistook Me for a Devil worshipper - because I AM the Devil. And I would never worship Myself - that would be the Ultimate Folly.

"And the Ancient philosophers said demons do not exist. Yet, whatever receives a form, that is generated and corrupted, is the demon, and the imagination is Satan, king of all demons."

"Satan is the Angel of Death, the evil inclination, the illusory imagination."

"You are man, you are angel, and you are Satan."

It is necessary to note that the growing public presence of "negative" literature (i.e. books overtly or unknowingly inspired from spiritually − negative sources) is not just the mild circumstance of a "democratic distribution" of diverse information. The presence of such material is not innocuous, nor is its active component confined to the personal imbibitions of content. It is not in the contents alone that such media carry their infectious messages. Everyone reading this review section should take to heart the real lesson contained in the incident reported by Strieber in Transformation, i.e. that of the psychiatrist who upon seeing the cover of the book felt compelled without knowing its contents to purchase it, the next day being greatly surprised to hear a number of patients report dreams of UFO abductions for the very first time. It is revealing that the covers of both Strieber's books depict the alien countenance of his abductor, for in Communion we learn that the entity actually modeled for Strieber at the interior space of his "third eye", specifying that it wanted the artist who would transcribe the description to get it right!!

To initiated understanding this clearly shows that the accurately − rendered image was to be used as a kind of talisman, or a material basis for the manifestation of that force − influence to which it corresponded.

Stneber gives vent once or twice in Transformation to the sentiment that, if he really thought the creatures with which he was dealing were negative or harmful he could not in all conscience expose people to what was clearly a powerful and unpredictably commanding influence. He should have held on to that thought. He should have made every effort to penetrate the shallow rationalization by which he "forgives himself" for his recalled participation, in youth, as the apparent ringleader of the "children's circle" whose job it apparently was to lure acquaintances out into the haunted woods of night where presently, amidst the horrified shrieks of many, they would find themselves face to face with something unspeakable.

In addition to Strieber's books, there is a motion picture of Communion soon to be released, as well as a spate of other movies already primed for the competition that purport to depict true − life alien encounters. These should not be considered ordinary modes of entertainment. They must be understood as vehicles, very potent types of imagistic "talisman" supplying the material basis for a mass manifestation of unprecedented character.

It is necessary to understand this for what it is, and not treat it as a removed spectator witnessing another phenomenon of mass entertainment. Everyone is involved, and there are children present. As was indicated, in last month's review titled Movie and Dream, the Qabalah of Star Wars, motion pictures have a profound correspondence with and influence upon the dream psyche, owing to the structure of the medium. That harbinger of the "Freddie" films, in which there arises an incursion into waking consciousness of the terrible content of dream and nightmare such that they are presently confounded and inextricably entwined, is poised to take place "in reality" the same as it was prefigured on film. In the specific instance of the Strieber books it is very advisable to neither buy nor read them, and this not the expression of some "censorship of content". There is something else going on altogether, something for which the public, in its wildest dreams, is scarcely prepared. It is advisable that the new films such as Strieber's dealing with UFO abduction etc be given a wide berth, and certainly children should be kept away from them!

What if it is all bullshit?

The logical sequence here would be to consider in the first place the more or less “determining” part played by the actual agents of the whole modern deviation, since the intervention of inferior influences really represents a new phase in the said deviation, and fits in exactly with the sequence of the “plan” by which it is brought about; it would clearly be necessary to seek in some such direction for the conscious auxiliaries of the maleficent forces; nevertheless the extent to which they are individually conscious of what they are doing may actually differ greatly in particular cases. As for the other auxiliaries, those who act in good faith and, because they know nothing of the true nature of the forces involved they are never anything but mere dupes, though this does not prevent their activity from being proportional to their sincerity and to their blindness; these auxiliaries are already virtually numberless, ...

It is insane, dude, it is totally insane.

Today the effort must be made;
Tomorrow Death may come, who knows?
No bargain with Mortality
Can keep him and his hordes away,
But one who dwells this ardently,
Relentlessly, by day, by night –
It is he, the Peaceful Sage has said,
Who has had a single excellent night.

The Shadow of the Dalai Lama said...